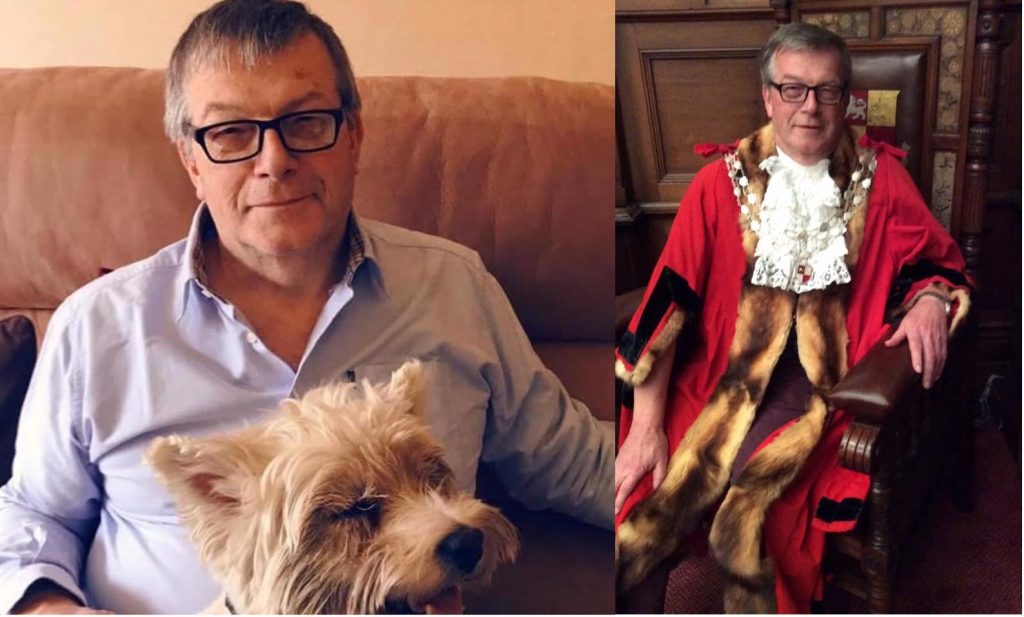 Many around the local area were devastated to hear of the sudden death of Alan Laver last Friday 30th July 2021 aged 68 years. Alan was a Freeman of Altrincham with Aldermanic status, a Past Provost of Altrincham, Clerk to Altrincham Court Leet & Deputy Baron Steward of Dunham Massey.

Alan grew up in Bowdon, attending The Keld Nursery school in Bowdon, Oldfield Brow Primary school and Altrincham Grammar School for Boys. Attending AGSB, Alan followed in the footsteps of his father Jimmy & Uncle Charles Laver. Alan’s grandfather had been the founding headmaster of the school, Laurence Saville Laver. Alan’s working life was connected with computers with Barclays & Lloyds.

After school Alan attended the University of Reading – the National College of Food Technology. His working life started as a trainee programmer in 1974 with Barclays Bank in London & he was amongst the first cohorts to start at Radbroke Hall after it was bought by Barclays to become the banks Innovation Centre. New challenges dawned in London, Jamaica, Miami, Cayman Islands, Puerto Rico & the Channel Island as he worked for a Computer Systems Agency before starting a 37-year career with TSB, Lloyds TSB & Lloyds taking on a variety of roles from Project Manager/ Consultant; Senior architect to Solution Architect, retiring in 2011. Alan had been a very experienced IT professional in the Banking sector who had an eye for detail and having had a broad range of experience gained across the wide range of banking systems within the Group and was actively engaged during past mergers.

“Alan was good to work with and was always trying to improve and move things on.” “He applied himself to projects to ensure a thorough design incorporated current standards and principles. He was a good team player.”

Alan was immensely proud of his AGSB connections. During the lead up to the Euro 2020 final he reminisced about Ladram Bay & School Camp which had been an essential part of his childhood holidays. In 1966 staff & fathers all watching the World Cup final in the local pub.

Since a heart attack in 1994 Alan stoically battled with heart issues. Alan dying suddenly at home is reminiscent of his own father’s death in 1966, uncles’ death in 1978 & grandfathers’ death in 1933 but as he was told in 2004, after a quadruple bi pass, that thanks to the NHS & the improvements in medical science he was in a better place.

Alan enjoyed a variety of pastimes but in the past 10 years was heavily involved with badminton playing 4 times a week with different groups. With Hale & District U3A, he became the badminton coordinator & the Beacon administrator. Many around Halecroft park would regularly see Alan on his ‘dog walk’ which he continued after having had Westies for 22 years. Alan loved helping people in so many ways and was known for his caring attitude and great sense of humour.

Many knew of his great love of cars and tackling the mechanics of all his classic cars over time & going on courses to enable him to carry out making seats & renewing a soft top.

Alan was a Freeman of Altrincham with Aldermanic status, a Past Provost of Altrincham, Clerk to Altrincham Court Leet & Deputy Baron Steward of Dunham Massey.

Alan was a loving husband to Denise for over 40 years and was a very devoted family man to his three children and little grandson, William.

Alan’s funeral is to take place on Thursday 19th August at Dunham Road Unitarian Chapel at 12 noon. All who knew him are welcome to attend.

In February this year Alan helped start the Hale &Hearty Defibrillators scheme, which after Euro2020, made him more determined to provide defibrillators for the community, as he had been lucky in 2019 to have been close to one at Altrincham Market

No flowers please as they are for the living to enjoy but donations for Hale & Hearty Defibrilators will be gratefully received in his memory. An initiative he helped set up with Hale Civic Society to provide defibrillators in the area.

In Alan’s memory it is felt important to carry on with the campaign as it was close to his heart & important for the community.