Good to see Ian on â€œClickâ€ this morning! 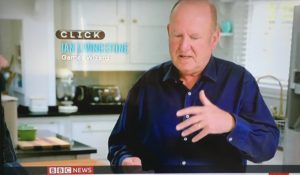 The University of Suffolk this week announced that Ian (old boy of AGSB and Guest Speaker at our dinner in 2014 ) will be receiving an honorary award at the graduation ceremonyÂ in October, and explained why:

Ian Livingstone CBEÂ is regarded as one of the founding fathers of the UK games industry and will be presented with an honorary doctorate at the graduation ceremonies. He co-founded iconic games company Games Workshop with Steve Jackson in 1975, launchingÂ Dungeons & DragonsÂ in Europe and laterÂ Warhammer.

In 1982, he co-authoredÂ TheÂ Warlock of Firetop Mountain,Â the first interactive gamebook in theÂ Fighting FantasyÂ series which has sold almost 20 million copies worldwide. He wrote 15 of the titles, includingÂ City of Thieves, Forest of DoomÂ andÂ Deathtrap Dungeon.

He has been awarded a BAFTA Special Award for his contribution to the video games industry and said of his honorary award, â€œI believe the arts and sciences should no longer be a question of either/or and must be brought together to encourage creativity and innovation. Creativity is a core strength of the UK and gives us an edge as a nation. Iâ€™m delighted that the University ofÂ Suffolk offers both arts courses and a BSc course in Computer Games programming. Not only is programming a transferable skill, it is an essential skill for the 21st century to enable digital creativity.”