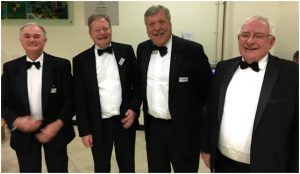 The 2018 dinner was held on Friday 9th March in Stamford Hall at the school and marked the 104th year of the Old Altrinchamians’ Association.

Association Chairman, Christian James, welcomed guests and proposed a toast to the Association followed by a toast to the Queen. The theme for this year’s dinner was to mark the retirement of Tim Gartside as Head Master of the school after 16 years, following his appointment as Executive Head of the Hamblin Education Trust.

Christian introduced the new Rafflemeister, Jake Harrop, who had taken over the job from Christian having served 10 years in the role.

Sodexo then served an excellent four course dinner and between courses the prefects table sold raffle tickets to guests, raising £520 on the evening.

The after-dinner formalities commenced with the presentation of the Old Altrinchamians’ golf trophy to last year’s winner, former pupil and current Director of Rugby, Scott Meakin.

A toast to the School was made by the Chairman with a response by the Head Master who this year doubled up as the guest speaker with a theme â€˜the best of times, the worst of times.

Mr Gartside recounted his humble beginnings from being brought up on the terraces of Rochdale Football Club and beginning his teaching career in Oldham, before moving to Cambridgeshire, then Newcastle-under-Lyne, then onto Southend before being appointed Head at AGSB, where the streets of Hale and Bowdon are no longer paved in the gold he’d heard about but instead riddled with pot holes!

It was with some trepidation and with low expectations that a relatively young TG applied for the role of Head Master and following a second interview was amazed to be offered the job. Perhaps his biggest surprise was how good a school he had been appointed to lead and thanked the former Heads sitting alongside him, for laying such strong foundations. TG found the pupils were not only very bright and enthusiastic to learn, but also exceptionally polite (and if they weren’t, they soon learned the importance of good manners!). He recounted former Head of Geography, John Barton, saying to him that one of the unique qualities of AGSB was not only academic success but also having fun and trusting the boys, because that in turn lead to further academic success.

TG could recall numerous best of times over the last 16 years; the exam scores and the position of the school in league tables has just got better and better. At A-Level last year the school achieved 81% A*, A and B grades with over a quarter of the subject entries at A*. This year the school has received 19 Oxbridge offers, and over 20 boys will be going on to study medicine. The school is in the top 10 of all-boy schools in the country, both at A-Level and GCSE, and just as significantly, the progress of pupils from primary school to GCSE and onto A-Level places the school amongst the very best in the whole country.

Under his leadership, the school has grown by about 30% in pupil numbers and the number of applications for pupils to join the school has almost doubled, with over 1,100 currently applying for the places available.

Perhaps the biggest way in which the school has changed during his tenure has been in terms of sport. 16 years ago the Head of P.E, Jon Hughes, and his colleagues would battle though with very muddy pitches and a limited sports hall, but with a few strokes of good luck and many more of good judgement, the school applied for and received £2.8 million funding from the Department for Education, plus additional money raised by parents and private enterprise, allowing the development of the new Grammar sports hall, tennis courts and astro-turf pitch. As a result of this, the Sports Department has grown in size (and now includes two Old Altrinchamians). Great success has been achieved, not only in the more traditional sports of rugby, football and hockey, but also a much broader band of sport including table tennis, tennis and badminton, demonstrating that the provision of good facilities really does encourage the enjoyment of sport, not only to those attending the school, but also to the wider community who have the ability to use the facilities outside school hours.

Music at the school has developed enormously over the last 16 years, and now boasts one of the strongest music departments in the country, having won 25 gold and platinum awards in national competitions, mainly thanks to inspirational teachers such as Colin Myers and Len Dejesus. Every Year 7 & 8 pupil now learns a proper musical instrument with much of the funding coming from the Old Altrinchamians’ Association and PFA. This culminated in perhaps one of the highlights of the year, with the excellent production of Jesus Christ Superstar.

So what about the worst of times? Thankfully these were very few. There have been times when the school hit the headlines for the wrong reasons, on the rare occasion where a pupil has had to be excluded from the school, but by far the saddest occasions are when a pupil has died tragically young. The Headmaster referred to three young pupils, namely Chad Mulholland who died from leukaemia in 2008, Robert Anderson who does from an asthma attack in 2009, and Will Menzies who committed suicide in 2013. Whilst these are clearly the worst of times, out of despair sometimes great things have come, and Chad’s Challenges has now been running for 10 years and has raised over £60,000 for Cancer Research. In memory of Robert Anderson, the school has held fundraising days in 2011 and 2012, one of which was marked by the visit of the Duke of Gloucester, raising large funds for Asthma UK.

Also listed under the bad times heading were incidents at Old Altrinchamians’ Dinners, the first being at the 2012 Centenary Dinner when there was a memorable outburst from what appeared to have been a former Shakespearean actor lambasting our choice of guest speaker. More recently, a guest speaker’s political slant proved too much for a couple of diners who’s heckles were still heard down the school corridor as they were frog-marched out by our esteemed Treasurer.

TG thanked the Old Altrinchamians for their super support throughout his time at Head Master with particular mention to Peter Morton (OAA President), former Chairmen, Mike Gittins and Colin Bamford, and Rowland Longshaw who organised the Old Altrinchamians’ dinner for over 25 years prior to his death a few years ago. TG thanked all Old Alts as an organisation with a proud history, a brilliant support to the school, and so many pleasant, thoughtful and intelligent people, but stressed that whilst he was moving onto his new role as Executive Head of the Hamblin Education Trust he looked forward to continuing to working with the Old Alts.

Following the Head Master’s speech, Christian James thanked the staff and honorary guests who attended, with particular thanks to Hilary Gartside who had supported the Association and all the dinners for the last 16 years.

Christian concluded with his ambitions statement to make the Association as engaging and relevant to as many past pupils as possible, and highlighted the list of other events taking place during the year.

Diners retired to the Sixth Form Common Room at approximately 10:30pm to enjoy what was left of the Dunham Massey Brewery offerings. A great evening was enjoyed by all those who attended.