The nineteenth annual Saville Laver Dinner was held at Jesus College Cambridge, on the evening of Saturday 11th March 2017. Pre-dinner drinks were served at 7:00 pm, and dinner followed at 7:30 pm in the Prioress’s Room. After the meal, diners withdrew to the recently built Jesus Bar.

The Saville Laver Society was founded in 1998 in honour of the first Head Master of Altrincham Grammar School for Boys, and the location of the Society annual dinner traditionally alternates annually between Oxford and Cambridge. Given that the event was held at Jesus College, Cambridge this year, we found ourselves breaking this tradition of alternation.

Jesus College is one of the leading colleges in the University of Cambridge. It was established between 1496 and 1516 on the site of the twelfth-century Benedictine nunnery of St Mary and St Radegund whose ruinous buildings, which included a huge church, were adapted to house it. Today these buildings remain at the College’s centre. Five spacious, three-sided courts containing rooms for students and Fellows, and beyond them twenty-four acres of gardens and playing fields, surround the nuns cloisters. There the College Chapel and Hall face one another, and the remains of the nunnery chapter-house may be seen. Interestingly, the full name of the college is The College of the Blessed Virgin Mary, Saint John the Evangelist and the glorious Virgin Saint Radegund, near Cambridge.

The Dinner is open to any old boys of the School who have attended, or are currently attending, one of the colleges of Oxford or Cambridge. All members of the staff of the School are most welcome to attend.

With thanks to Kenneth Lea and George Gould 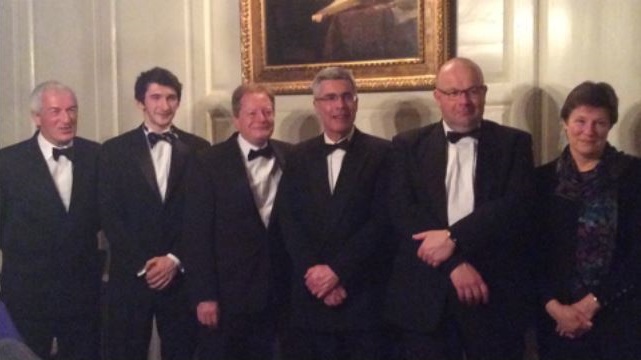