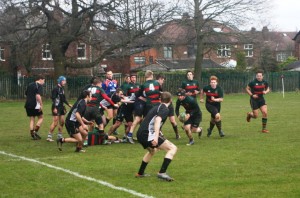 The Old Boys match is always a fascinating contest; the bulk and strength of the beer-bellied University students versus the speed and skill of the fledgling Years 11 to 13. The grey afternoon of Wednesday the 1st of April 2015 was no exception.

Eager to avenge the humiliating 2014 loss, the Old Boys, kitted out in gear not even Mr. Meakin would want to scrounge, began to warm up a good hour before kick-off. This was in stark contrast to the lack of enthusiasm shown by the 1 XV, fuelled with fear having discovered intel on a particular member of the opposition, a certain Mr. Okoye. However, drawing inspiration from last yearâ€™s victory, and a simply outstanding and moving team talk from the stand-in coach, both sides were equally pumped at the starting whistle.

It was the Old Boys that had much of the early pressure. For large swathes of the opening 15 minutes they were camped on the 1st XVâ€™s 5 metre line, needing to be held up on two occasions. Line breaks from Jonny Dodd and Cal Robinson also threatened to busy the scoreboard, with the School struggling to deal with the high physicality. The breakthrough refused to come however, allowing the 1stâ€™s to get a foothold into the game. Strong carries from Aidan Gray gave impetus to the attack, but both teams struggled to maintain possession of the ball for long periods. For the Old Boys, the wayward throwing of Tom Shanter at the line out scuppered good opportunities to open the scoring, whereas the Schoolâ€™s lack of composure led to many unforced errors. The result was that at half time the two sides were level at 0 â€“ 0.

Half time consisted of numerous shouts of â€œWe can â€˜ave theseâ€, and â€œGet me to the pubâ€, plus vein attempts to recover some energy after the first half excursions. With the teams so evenly matched, it was going to take something really special in the second half to separate the two sides. As the Old Boys tired, the 1st XV started to control the game, but still the war of attrition continued. Massive hits from both sides started to fly in, Emeka Okoye and the Year 11 pair of Nico Nealon and Saif Rattoo in particular putting their weight around. As a result, tensions started to boil over. Benson Senior, and the ever annoying Toby Nicholls, clashed after the latter had poked the hornetsâ€™ nest one too many times. The decisive moment came from the outstanding Aidan Gray however, using his considerable bulk to escape down the left hand side and open the scoring with only 10 minutes of the match remaining. With Will Harrison slotting over the conversion, the School looked destined to make it two victories on the trot. The game was not over yet though. Captain Jimmy Smith, spurred on by his Fan Club in attendance, managed to go over 3 minutes from time, setting up the first ever tied Old Boys match.

Having ended at 7 points apiece, the â€˜Battle Royaleâ€™ went to a kick off; 5 kickers, 22 yards, 1 winner. After seven immaculate kicks putting the score at 4 â€“ 3 to the School, a miscue from the heavy-legged Old Boys gave Man of the Match Gray the opportunity to put the tie to bed. This was an opportunity he missed however, as the â€œwindâ€ was â€œtoo strongâ€ and â€œput him offâ€. As a result, the contest went to sudden death shoot-out, a fitting end considering how even both sides were. Now taken from the right hand touchline, Harrison succeeded in putting the 1st XV ahead, making Jonny Doddâ€™s attempt â€˜do or dieâ€™. Unfortunately for him and his team-mates it was the latter, missing the left hand post by a whisker and thus handing a second consecutive victory to the School.

It was a game neither side really deserved to lose, but in my biased opinion the School probably just edged it. Despite it being a scrappy affair, the effort and determination shown by both sides was exemplary, and is what makes the Old Boys game so special. It is one of the most competitive and enjoyable matches of the season, and hopefully next year can live up to these lofty heights once more.